Yes, plenty of progress since our last post. After a grueling Christmas/new year period constantly at it, we had to take a break from the project, recharge our energies (as-in human energies) before we could launch into the final build.

It was "fun" taking the Hydraulic Pump (that drives suspension, brakes and power steering in a Citroen DS) off the ICE and adapting it for an electric motor that now drives the Hydropneumatic system!

Well a bit of detail! We are utilising a 24v x 450w x 400 RPM bicycle motor to drive the pump (as kindly recommended by Henk the only other Citroen DS conversion I know off; in Holland). The previous motor I had acquired from China did not work as it was not geared; high-revving with no low-end torque. My friend Geoff machined pulleys for me an supplied a rubber toothed belt that now drives the pump off the motor.

All 360 batteries that give us 240Ah @ 96v, are now assembled and mounted in the vehicle, mostly up-front on top of the motor and some in the place where the fuel tank used to reside. This gives optimal weight distribution and overall weight that matches that of the original vehicle. And what a sight it is.........
We have 5 x 240AH packs in the fuel tank, or 16v and 80v in the engine bay in the front. To a total of 96v @ 240AH.
Yes, the air-horns are a standard issue with this vehicle. The Citroen DS was issued with a 2 stage horn system that still works well in our vehicle. When one pulls the horn lever, it sounds a normal horn. However, in case the "baguette camion" does not move out of the way "tout-de-suite", then pull the lever further and the air horns go for gold............
No horrid steel battery boxes! The Green Joey kits seem to have worked a charm, with the self-mounting threaded rods that fasten the pack together while attaching it to the subframe we welded for it makes for relatively "easy" assembly ready to take cooling fans if required. We shall decide whether we need fans, after the first few trials.

Being a reverse layout (gearbox in from of engine/electric motor), the gear lever linkage to the gearbox is via rod and cable. The rod selects the gears (5 speed plus reverse), while the cable shifts the "neutral" tunnel in between the various gears. The rod had to be redirected to move from over the ICE to under the batteries and you can just barely see it above; the crooked rod. Next, another set of batteries is mounted on top.

2 green spheres! For the non-Citroen initiated, that's the suspension....... The one at the bottom on the pic is the accumulator that maintains a standard pressure in the system and that is topped-up by the compressor as required. The other sphere is one of 4 that sit on each wheel and replace the traditional steel springs. They are half filled with Nitrogen (the springy part) and half with oil, interconnected to each other, the brakes and the steering to form the whole system. Not as complex as it sounds, but never the less, ingenious.

In the 2 pictures above, but specifically in the one right above, one can see the hall-effect throttle that now replaces the fuel-injection system; still connected utilising the oriinal cable and accellerator pedal (keeping to the original wherever possible).

More views of the cabling including Controller (above and below) and the contactor above, right.

That's right regen......... Well, yet to be seen what the best solution will be. So far, we are planning to have a regen/disks braking system. 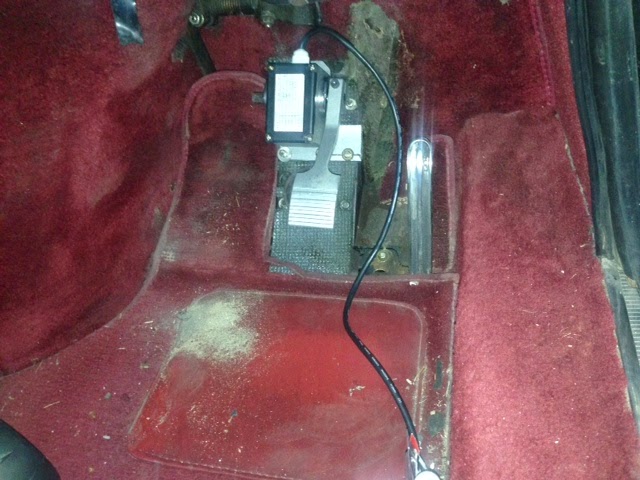 Citroen does not use a traditional foot brake. Instead it utilises a "mushroom" similar to the old dimmer switches in old cars for those of us old enough to remember. In any case, it is a small mound on the floor that you merely squeeze millimetrically with your foot to generate amazing braking power. We have placed a hall-effect "throttle" pedal over the top of the "mushroom so that now the firs 75% of the travel is braking utilising regen to slow down the vehicle with the "mushroom" available just by moving the pedal further to activate the disk brakes for positive and aggressive braking requirements, hopefully only on rare occasions. All other times, braking is recharging the batteries.