Research on the AC31/Curtis Controller combo

Research on the AC31/Curtis Controller combo
With some limited data, I have carried out some comparisons. Feedback very welcome. 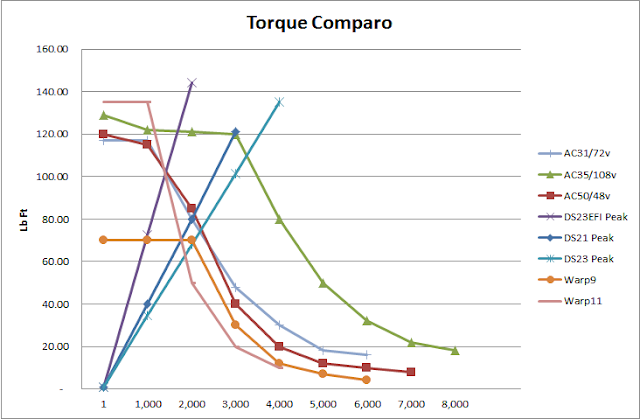 Courtesy http://www.nappepin.com/LithiumHawk2.htm
"The drive system is made up of the Motor, Motor Controller, Intermediate Drive and Final Drive.  I chose a similar motor (same type and manufacturer) as used in the Lithium BugE.  The motor is a Model AC31 manufactured by (HPEVS) High Performance Electric Vehicle Systems. With the right controller, the motor will produce up to 50hp at 115 ft-lbs of torque.  That may not seem like a lot until you consider that 100% of the torque is available at 0 RPM to about 2000RPM before it begins to decline.  This is almost opposite to that of a gas engine which starts with no torque, climbs and peaks at maybe 2000 to 3000RPM then declines.  This AC motor has a maximum RPM of 6000 and is capable of moving a 3500lb vehicle at highway speeds.  Considering that the Lithium Hawk is targeted for under 1000lbs, you can see why this vehicle should perform well.  One more note, this motor is of course brushless and maintenance free,  The problem that you can face is overheating.  It is for that reason that I chose the much heavier AC31 over the AC20.  The AC20 can put out similar horsepower but at around 45 lbs (as I recall) it is not designed for continuous heavy loads.  I talked to the engineers at HPEVS, described my application and asked which motor would be better.  They recommended the much heavier (85lbs) AC31 without hesitation.  These are great motors operating in excess of 90% efficiency.  You'll never find an automobile gas or diesel engine that is maintenance free and operates at 90% efficiency. 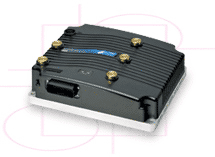 Shown are the AC31 motor, performance data (132 volt data not available) and the Curtis 1238 controller.

The Curtis AC controller is a highly programmable, high efficiency workhorse.  It is capable of producing over 550Amps of 3 phase variable frequency power and can handle a system voltage of up to 130Vdc.  Perhaps the most important feature of this AC system is that it supports variable regenerative braking. "

Looks like I need an Elcon Battery Charger
"I received the Elcon battery charger. http://www.tccharger.com/english/Product/T35/49.html This is an interesting charger in that is it auto-switching depending on the line voltage you supply it. (120VAC or 230VAC)  These chargers are custom programmed to your specifications.  Mine was programmed for a peak charging voltage of 138.7 volts which is 38 series connected cells or modules.  The peak voltage of 138.7 volts exceeds the maximum allowable voltage of my motor controller however I did that intentionally because soon after lithium cells are charged, their peak charging voltage of 3.65 volts soon drops to 3.35 to 3.4 volts.  I'll need to build something that prevents the motor controller from being turned on until the pack voltage drops to 130 volts either naturally, or by some energy bleed mechanism that I will build.  I did this so that I my nominal voltage would be closer to my peak allowable voltage.  Had I chose to have the charger programmed for 130 volts, I would have ended up with a nominal voltage of around 117 volts instead of 127.5 volts.  The higher system voltage will provide maximum power and efficiency.

This charger operates at >93% efficiency and will supply 20 amps of current from a 230VAC line voltage. At 120VAC, it will operate as a 10 amp charger.  This will be pretty handy because I can install the charger in the vehicle and have onboard 120VAC charging but be able to use 230VAC charging at 20 amps at home.

Probably the most important feature of the charger besides the auto switching is the ability to control the output current.  This is critical for the battery management system where I will need to reduce the current down to perhaps 1 amp to precisely balance the cells.  That is a topic in itself."

I guess I'll need batteries.......
"I ran load and impedance tests for 2 months on all cells I brought in including original used A123 white sleeve cells, unused A123 green sleeve cells and K2 Energy solution's LP26650EV energy cell and their LP26650P power cell.  I used a West Mountain Radio CBIII cell analyzer to test the cells for voltage drop, heat gain and energy capacity based on the actual conditions the cell would be subjected to when configured into parallel series modules.  For example, if each cell module will consist of say 52 cells in parallel and the motor controller's maximum current is 550 Amps, each cell will be subject to 550 amps/52 cells or 10.6 amps peak.  Nominal current (estimated city driven current draw) would be 70 amps equating to 1.34 amps draw per cell and highway would be 200 amps or 3.86 amps per cell.

From all of the tests, I determined that the A123s http://www.a123systems.com/ performed the best with the highest power output and lowest heat gain.  However the K2 cells exhibited higher energy content.  The K2 Energy cell is rated at 3.2Ah compared to 2.3Ah for A123 cells while the K2 power cell is rated for 2.6Ah.  I'll post some test results soon.  The voltage drop for the K2 cells was greater than the A123 cells as expected.  I chose the K2 power cells because the A123 samples had various date codes ranging from 1 year old to 5 years and some test results were a bit erratic with the capacity being less than specified.  The K2 cells netted very consistent results and performed outstanding for the conditions they will be subject to.  So I ordered 2000 of the LP26650P cells.  These weigh 82 grams each, hold 2.6 Ah of energy, can deliver 40 amps continuous and 150 amps peak.  Considering my peak current draw on a single cell will be 10.6 amps and only 1.34 nominal, I will be operating the cells well within their specifications."

Summary
I am so confused now with various claims of voltages, HP and other performance related information. Thank god for my mates, the geeks at AEVA.