The DS Engine is OUT!

Thanks to Mark's help and his engine crane, the engine/gearbox assembly was out in no time. I had disconnected most of the 1.5 million wires and hydraulic pipes and once we removed the final few that became apparent as we started extracting the engine, the path was clear for total extraction to explore what actually had gone wrong, when the vehicle, 3 weeks earlier, had lost traction! 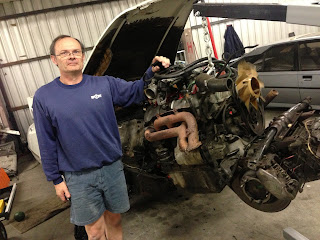 Engine/Gearbox separation was next. As one can observe from the following pic, one can clearly see the optimal layout of this vehicle, mid-engined with inboard disk brakes. Upon separation, the Input Shaft fell-out, which should not have happened as this is meant to be held in the gearbox by a circlip; that according to Jason Hantos, (my vintage Citroen advisor) is a component that wears-out with time! 2 days of dismantling for a simple circlip that needs to be replaced. 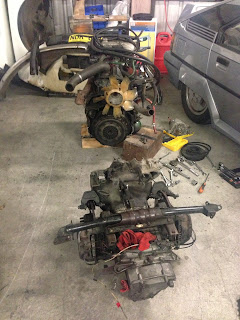 Here is the offending shaft that needs to be replaced as the splines are showing signs of wear! 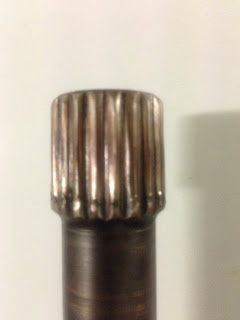 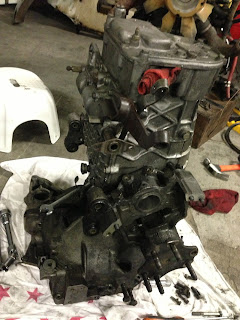 Oh, and then, there is the gunk. The oil and dirt covering the whole inside of the engine compartment as well as the Engine/Gearbox assembly. The mechanical parts are easier  once assembled, cleaning is straight-forward. But the engine compartment and the million pipes and cables; that's another story. Tarps down, engine cleaning sprayed everywhere and a good pressurised hose-down, does most of the job. Now the painstaking detailed cleaning is a labour of love! 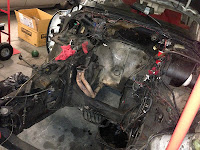 Before and after (still the detailed cleaning to be undertaken)! 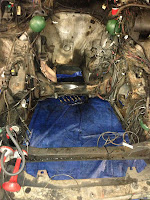 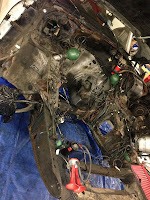 Following the detailed cleaning, the architecting of the new layout for the electrics starts. While this is happening, petrol tank, exhaust and all related parts need to come-out to release as much unnecessary weight as possible.

Oh, we have now decided that the clutch needs to go, unnecessary extra weight. The slow-down for effective change will be managed through regenerative braking. I think this is a neat solution!